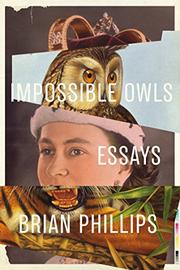 Long-form narratives both diverting and engaging.

In his debut collection, former Grantland and MTV News writer Phillips follows the familiar trajectory of the participatory journalist chasing down new angles on quirky subjects and subcultures—space invaders, sumo wrestlers, the Iditarod, tiger tourism in India—but his work stands out for its refreshing lack of memoir. On the whole, the author’s eclectic travelogues and essays don’t end up being journeys back to the author himself, though his keen sensitivities color each scene, and he rarely hides his feelings about the figures he meets. Phillips has fashioned a calling for himself as an American flâneur, casting out into post-colonial frontiers and marveling at the oddities he encounters from the comfortable distance of unsupervised creative prose. His style blends free-form anecdotes with capsule histories and novellike passages that don’t stop to sort out fact from perception or conjectures. Of his days among remote Alaskans, he writes, “it was such a warm place. I mean, fine, we’re all jaded here, but you could feel it: this fragile human warmth surrounded by almost unmanageable sadness.” Topics begin in earnest but drop away to follow alternate lines of inquiry. For example, a nerd’s-eye view of UFO enthusiasm surrounding Area 51 leads to reveries on the PTSD of otherwise sane people who claim alien abduction, the derelict remains of Route 66, the genocide of Native Americans, and the mysteries of time as expressed in landscape. His biographical sketches of the British royal family speculate on their private conversations (“My dear, these people are beneath us,” he imagines Prince Philip whispering to the queen), and he narrates the life of gifted Russian animator Yuri Norstein in the present-tense omniscience of a film script. Such stylistic pyrotechnics impress less, however, than the flecks of genuine insight the author dredges up from his experiences as well as the sense of a full human mind at large in the world that so many of his recollections approximate.

Smooth and smart relief for the screen-weary.