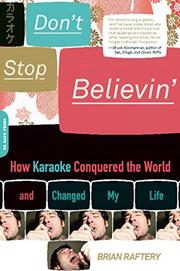 How Karaoke Conquered the World and Saved My Life

Though he frequently sang to himself as a child, the author didn’t get his first taste of proper karaoke until 1988, when his family moved to Honolulu. One night, his father belted a drunken version of Frank Sinatra’s “New York, New York” in one of the city’s many karaoke bars. Raftery may not have witnessed it firsthand, but his mother’s recounting left an indelible image in his mind. It wasn’t until years later that his obsession was born. “As was the case with so many other ludicrous pursuits I picked up in my twenties—malt liquor, ska, polyester suits—I was finally talked into karaoke by my friend Mike,” he writes. Raftery got his start at Village Karaoke in the Bowery neighborhood of New York City, where he and his friends eventually became regulars. In 2000, he and Mike created a short-lived public-access show, Karaoke! Adventure!, which featured drunken puppets singing such classics as H-Town’s “Knockin’ Da Boots.” The author’s obsession, delineated in colorful, mostly engaging prose, would eventually lead him to countless karaoke bars in NYC and Japan, where he sought the origins of the phenomenon and endeavored to visit as may karaoke bars as possible. Interspersed with his personal story is a loose-limbed, entertaining history: the invention of the first karaoke machine, the Juke-8, created in 1971 by Daisake Inoue; the story of Sal Ferraro, who, he claims, founded the first karaoke bar in the United States in 1982; the germination of the “Original Punk Rock/Heavy Metal Karaoke Band” at Arlene’s Grocery in NYC; and the 1985 founding of Sound Choice, “one of the largest karaoke-track providers in the world.” This last chapter is the most intriguing, as Raftery provides insight into the talented studio musicians who spend hours charting and recording pop hits note for note, exactly as heard on the original albums. The book ends with the author’s trip to the 2007 Karaoke World Championship in Bangkok.