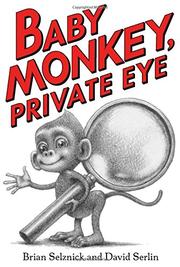 In five chapters spanning almost 200 pages, Selznick—here working with husband Serlin—manages to do for the early reader what he accomplished with the picture book: reinvent it.

The narrative unfolds in finely wrought, crosshatched compositions drawn in pencil and introducing the color red to reward readers as they hunt for stolen objects alongside the pint-sized simian detective. Though he’s as successful as his hard-boiled, cinematic counterparts, Baby Monkey is still a youngster, so after each client arrives for consultation, he playfully peers through his magnifying glass, scribbles findings, nibbles snacks, and attempts to dress himself. This structure provides the repetition that, when paired with brief sentences, visual clues, a large typeface, and clear dialogue bubbles, serves the format extremely well. Impish expressions and oversized trousers will amuse the audience throughout each of the several-page wardrobe sequences. Preceding each knock on the door is an office “scene change” inviting viewers to analyze objects and predict the visitor’s identity; for example, and in a nod to The Invention of Hugo Cabret, the iconic image from Georges Méliès’ A Trip to the Moon heralds an astronaut. An oversized bonnet and dress shroud the final guest in mystery until the loving denouement. Not to be missed are the sendups of a bibliography and index, and adult readers will enjoy the visual keys to the clues planted in Baby Monkey’s office.

Wrapped in the chiaroscuro of film noir, kids will forget they are learning to read, focusing instead on the comic bits, persistence, and vulnerability of an endearing hero.