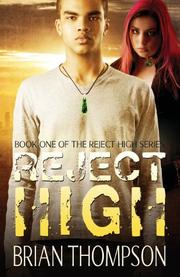 Kids the system has given up on acquire power of their own in Thompson’s (The Anarchists, 2012, etc.) YA debut sci-fi thriller, the first in a series set among students at an alternative high school.

Jason Champion suffers from ADHD and rage blackouts. After he breaks a student’s jaw in a fight he doesn’t remember, he lands at Regional Education and Guidance Collective Training high school for the last two weeks of his freshman year. R.E.G.C.T., colloquially known as “Reject High,” is a dumping ground for students the district would prefer to forget; having just reopened after a student’s on-site suicide, the school’s slated for demolition during the summer. Jason strikes up a friendship with goth girl Rhapsody Lowe. While playing hooky in the same restroom where Cherish Watkins killed herself, they’re almost caught by an armed Student Resource officer who patrols the halls. In fact, they should have been caught—Jason knows the cop looked right at him but didn’t seem to see him. Mystified, he grills Rhapsody as they serve detention together for kissing in the cafeteria. She reveals that she has powers of invisibility, thanks to a bright green crystal found in the school’s basement. When she gives Jason a prism made of the same material, he develops powers of his own: superhuman strength and incredible jumping ability. Soon, they’re pursued by unknown adversaries who want to protect “the source.” Thompson attempts to address serious issues, such as mental illness, bullying and victim-blaming (Jason’s love interest, Sasha, was kicked out of her previous school because a boyfriend taped them having sex and circulated it online), but the book’s overextended breadth doesn’t suit the story well. However, once the superpowers and villainous conspiracies show up, these topics fade into the background in favor of chase scenes and portentous bad-guy speeches. Still, it’s refreshing to read a YA novel with main characters of color whose race isn’t the focus. Though little is wrapped up in this entry in the series, potential remains for later books to better develop the lore of the strange crystals.

An occasionally muddled, overambitious foray into an X-Men–like universe.