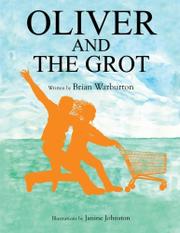 OLIVER AND THE GROT

Warburton (Sappers Six, 2010) tells a Cinderella story about a British teen working at a superstore.

Oliver Goodfellow sits in a wet parking lot bemoaning his job collecting shopping carts, as he’d rather be studying architecture. His three “grotty” (unattractive) co-workers, meanwhile, always put him down. Bob, Charlie and Jack—a group Oliver calls “the grot”—are portrayed as looking just like Oliver, but with unpleasant expressions and gorillalike limbs. A daydreaming Oliver recalls reading “Cinderella” to his young cousin: “Since I’m a boy he thought that story would never happen to me.” The grot interrupts Oliver’s reverie as they leave for a party at the Disco Club; Oliver, unfortunately, has to stay and work. In the parking lot, he meets Teresa, a “ ‘drop-dead’ pretty” rollerblading girl. Not only does she have tickets to the bash, but she also convinces her father, the store manager, to let Oliver leave—as long as he collects all the trolleys by 10 p.m. Oliver’s delighted but worries about his work clothes. Teresa—serving as fairy godmother and princess—borrows stylish clothes and athletic shoes from the store’s sample bin. Oliver pushes her to the party in a Christmas-decorated trolley, and they create a stir on the dance floor. The grot is amazed: “ ‘Cor!’ was all that they could say.” Oliver slips away just before 10. The next morning, Oliver gets a better job inside the store, and Charlie pulls trolley duty.  Teresa, confused by the switch, can’t tell which boy was her dance partner. Oliver, although puzzled, decides to have some fun, suggesting that each boy try on the returned trainers to see if they fit. Soon, Teresa and Oliver are reunited, and everyone laughs about the turnabout Cinderella tale. While the idea of recasting this age-old story in the workaday world has some potential, readers may find this version’s text to be overly wordy and stilted and its illustrations rather stiff. Younger picture-book readers may have difficulty relating to the older characters. The story is also so filled with obscure British expressions that it may not appeal to some American audiences.

An intriguing but flawed update of a classic fairy tale.