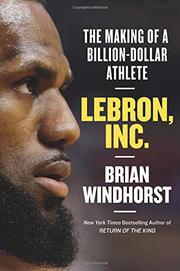 The Making of a Billion-Dollar Athlete

ESPN NBA reporter Windhorst (co-author: Return of the King: LeBron James, the Cleveland Cavaliers and the Greatest Comeback in NBA History, 2017, etc.) probably knows more about James than any other sportswriter, especially after covering him as the Cavaliers beat writer for the Akron Beacon Journal and Cleveland Plain Dealer before moving to ESPN. In his latest book on the King, the author chronicles his business deals both on and off the court, most of which have been successful, largely due to one main quality that Windhorst highlights throughout: his awareness of everything going on around him, which has not only guided his legendary basketball career, but also “has been vital for the expansion of his business empire.” The author straightforwardly lays out James’ various ventures, beginning with the orchestration of a fierce bidding war for his first shoe contract. Though Reebok made a significant offer, James ultimately went with Nike, signing a seven-year contract that, with the $10 million signing bonus, came to $87 million—before he was even drafted in the NBA. From there, James would go on to astronomical financial and athletic success in the NBA as well as in the film, restaurant, real estate, and other industries. Windhorst dutifully chronicles all of his deals, often comparing them to other business ventures by megastar athletes including Michael Jordan, Tiger Woods, and Kobe Bryant. Though James is not yet a billionaire, the author notes that “he may be getting close,” and while he has made a couple poor business choices, he’s known for being relatively frugal (at least for a near billionaire), his “business is still very much unfolding.” For LeBron devotees and readers interested in the mechanics of off-the-court business dealings, this is a good choice, but the prose is merely serviceable and the narrative flow, workmanlike.

A mildly intriguing look at a global icon that would have been more effective as a long-form magazine article or continuing series.