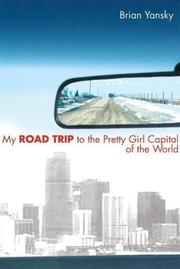 MY ROAD TRIP TO THE PRETTY GIRL CAPITAL OF THE WORLD

Chock full of larger-than-life, delightfully eccentric characters, Yansky’s coming-of-age chronicles a young man’s road trip from Iowa to Texas to seek out his biological parents. Things haven’t been going well for 17-year-old Simon. Dumped by his girlfriend, suspended from school for fighting, and feeling that he’s a continual disappointment to his conventional but closed adoptive parents, Simon steals the family car and sets off to find the truth about his origins. Before long he’s traveling with a band of erratic rogues made up of an Elvis impersonator, a pair of homeless men, and a hot, manipulative young woman they rescue from her abusive husband. Although the highway is filled with speed bumps, some touching, some funny, and some just plain peculiar, the group eventually makes it to Texas, where Simon learns the curious truth about his biological parents and makes peace with his present and his past. Keenly observed and continually surprising, this is a road trip well worth taking. (Fiction. YA)