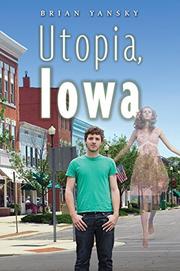 A small town's population is paranormally gifted in this new mystery.

High school senior Jack Bell balances his classes and home life while dreaming of becoming a Hollywood screenwriter. He lives in Utopia, Iowa, a small town that has one curious trait: All the residents have paranormal gifts, which may have something to do with local Nirvana College’s peculiar curriculum. Jack can see the dead, and several are trying to get him to solve their murders. It's a nifty premise, but Yansky never breathes life into it. Jack goes through the gumshoe motions, but he ends up drowning in his wordy narration, which vacillates between colloquial and weirdly formal. He has a tendency toward overlong sentences and uses unnecessary flourishes that make him sound fussy rather than quirky: “Our mother accommodated my carnivorous preference by making me pot roasts and hamburgers and chicken to go with whatever arrangement of vegetables [my vegetarian family was] eating.” Verbal tics, especially repeated references to movie data, further bog the story down. The central mystery never adds up to anything of real consequence, leaving the exploration of Jack's home life the lone highlight: His parents are going through a rough patch in their marriage, and the author nails the tone of a couple experiencing a frosty period. Unfortunately, this drama is only in the background, and in the end, it just peters out.

Alas, not as much fun as it should be.