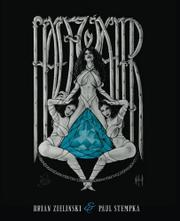 An illustrated novel about an unlikely hero and his adventures in a violent future.

From debut authors Zielinski and Stempka comes Boldizar Halfwater, a handyman drug addict who, at 5 feet 6 inches tall and “barely weighing over 100 pounds when fully clothed…was not an imposing figure.” Boldizar lives alone in a dusty, humble dwelling, fueling his days with cocaine and general indifference. “Simply put—he was lazy, and preferred to spend more time relaxing with a cool drink and a pile of drugs than toiling in his workshop fixing broken items.” After fixing a mechanical dog washer and polisher for local tough man Billy Von Bixby, Boldizar’s lazy life abruptly changes. Upon delivery of the repaired item, Boldizar inexplicably murders Billy with a pocket knife. Why would Boldizar murder one of the most dangerous men in town? Even he isn’t sure. Fortunately for Boldizar, his friend Reginald is around with his horse Alabama Cush. The two escape to the woods, where they are pursued by the corpulent, cannibalistic Bittertight (“Small pieces of food spit and hopped out of his flapping jaws like fleas from a dogs bark”), head of the Goughnuts Guard. Once out of immediate danger, Boldizar learns that the dog polisher contains a glowing blue pendant, leading him to ask, “What kind of fucked up jewelry is this?” So begins a quest to find out just what kind of jewelry it is while avoiding capture from the feared Bittertight. Encountering everything from a powerful gladiator to a Screamicorn, a “demonically hellish red horse” that kills its victims with a scream, the hero has multiple zany, gory exploits. The overall outrageousness of events will excite readers unperturbed by exploding body parts and allusions to crude sexual practices (“Usually he would look to mastiffs to service his sexual needs since they couldn’t judge him, and the rules of bestiality were long since forgotten”). While Boldizar himself does not prove the most intriguing hero, his story involves enough peripheral inventiveness to please readers of similar works.

Fans of heavy metal–style sword slashing nastiness will take to this outlandish adventure.