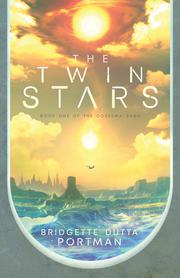 In this YA debut, a troubled teenager gets thrust into the fictional superhero setting of her amateur storytelling efforts, where the conflicts, creatures, and characters she fashioned put her in grave danger.

Playwright Portman’s SF/fantasy novel might remind genre readers of Cornelia Funke’s Inkheart franchise. Olive Joshi, 16, is on a stressful plane trip to her grandmother’s memorial ceremony in India. Grandmother was a successful writer, and Olive, in her ever present notebook, seeks to create her own fantasy realm, that of a young, seemingly invulnerable Wonder Woman type named Coseema. The superhero is really an idealized version of Olive—battling boundless malice (her own evil prince brother, Burnash, in fact) in a planetary system of rapidly degrading twin suns and rival kingdoms reduced to subsistence by solar disasters. During a crescendo of bad-weather turbulence over Alaska mirroring her emotional upset, Olive locks herself in the plane’s restroom and suddenly finds herself inside her own journal and its draft story of Coseema. Now, the novice writer is stranded on the “Musing Moon” of her narrative, where magical artists, high-tech storm troopers, amazing creatures, and Coseema really exist. One might think that as an author inside the world she created, Olive would wield immense powers and insights, but the reverse seems to be true. When she loses Coseema’s protection, the sun-scorched worlds and their tormented inhabitants are a dangerous place indeed. Olive carries the additional burden of guilt that, as the one who dreamed it all up, this universe’s predicaments and agony are her fault. The Lucasfilm-esque milieu, blending magic with exobiology, astrophysics, and a painless layering of multiculturalism, is a tantalizing one. Portman adds a layer of emotion via Olive’s struggle with obsessive-compulsive disorder and anxiety, which impinges on the storyline in a more meaningful way than just checking a box in the character mental health problems column. YA readers raised on various permutations of the superhero mythos should be enthralled by the Coseema/Olive dichotomy in this metafictional series opener. Even older, jaded genre readers, griping that L. Ron Hubbard hit on this scenario first in Typewriter in the Sky (1940), could be thrown by the plotline’s chain of bang-up jolts in the concluding pages.

A superhero creator’s angst-y perils make this tale a strong start to a space saga.