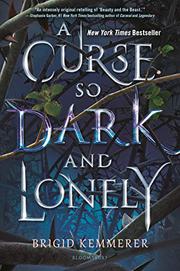 A CURSE SO DARK AND LONELY

From the Cursebreaker series, volume 1

A cursed prince and a high school dropout become unlikely allies in this ambitious “Beauty and the Beast” adaptation.

Harper’s life in Washington, D.C., hasn’t been easy: Her mother is dying of cancer, and her father’s only legacy is the loan sharks her brother Jake works for to pay off his debts. Harper, who has cerebral palsy, is standing lookout for Jake when she sees a man carrying an unconscious woman. Harper intervenes—and is magically transported to Emberfall, a kingdom abandoned by its rulers and beset by both a mysterious beast and attacks from a neighboring country. She meets blond Prince Rhen, who reveals that the beast killed his family. He believes falling in love is the only way to save his kingdom, and his guard commander travels to Harper’s universe to find matches for him. Harper doesn’t buy it. Rather than acquiesce to fate, she calls Rhen’s attention to more immediate, practical actions they can take to protect his kingdom. The book follows a white default for main characters, although Jake’s boyfriend is black and Harper’s best friend in Emberfall has brown skin. Refreshingly, Harper is the undisputed hero and also not the only significant character with a disability. Avoiding disability inspiration tropes, she is a fallible, well-rounded character who fights for the vulnerable and resists being labeled as such herself despite how others perceive her.