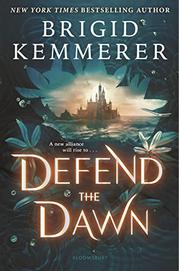 From the Defy the Night series, volume 2

As the Moonflower supply in Kandala dwindles, a ship arrives with a trade opportunity in this follow-up to Defy the Night (2021).

Moonflowers are critical for an elixir that cures the fever sickness. Prior to his assassination, King Lucas of Kandala sent a spy to neighboring Ostriary, whose connection with Kandala had been severed. Now Capt. Rian Blakemore arrives in Kandala claiming to be the spy’s son, offering Moonflowers in exchange for steel, and inviting a delegation to meet with the Ostrian king. Tessa Cade, outlaw-turned–royal apothecary, is eager to go. Since the invasion of the Royal Sector, Kandala’s King Harristan has attempted to negotiate better distribution of Moonflower petals to the poorer districts, but tension among the rebels, consuls, and royals has stalled progress. An alternate supply of Moonflowers would buy time for Tessa to find another cure. Her hope is countered by the cynicism of the King’s Justice, Prince Corrick. Nevertheless, he boards Blakemore’s ship along with Tessa and rebel leader Lochlan Cresswell. As Tessa and Corrick try to discern hidden motives and a possible trap, they reexamine their relationship, which gets tested by the mysterious captain. Chapters told in alternating perspectives draw out the plot at a measured pace, ending with a series of shocking revelations. The structure results in introspective accounts following different concurrent events, slowing the story’s forward momentum. Characters have varying skin tones.

A second volume that sets the scene for more to come.