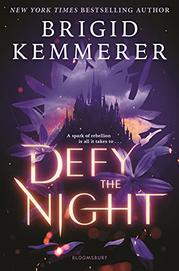 The only effective treatment for the lethal fever that plagues Kandala is a potion derived from the rare Moonflower.

Medicine is allocated to each sector of the kingdom by the decree of King Harristan, but the supply is limited. Thieves, smugglers, and black marketeers are subject to punishment and execution overseen by the cruel Prince Corrick in his role as the King’s Justice. Like many in Kandala, Tessa Cade loathes the king and his younger brother for ignoring the plight of those who cannot afford treatment. With the help of her close friend Weston, the 18-year-old apothecary’s assistant steals Moonflower petals from the wealthy and makes potions to distribute among the poor. Soon after Wes is caught by the night patrol, Tessa is presented with an opportunity to sneak into the palace. She enters with the intention of taking a sample of the palace’s potent Moonflower elixir only to be captured and brought before Prince Corrick, who, Tessa discovers, might not be as heartless as she originally believed. The slow-burn romance—between an idealist with straightforward moral beliefs and a pragmatist trapped by duty—will keep the pages turning, as will the scheming of the king’s consuls and the rebellion brewing in the background. Tessa and Corrick are cued White; other characters’ skin colors range from beige to deep brown.

The personal and the political intertwine in this engaging series opener.