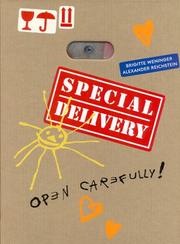 Earning high marks for clever design, this picture book resembles the shipping carton around which the story revolves. After mother tries out her new vacuum cleaner, the box in which it came reappears on the porch, newly decorated and addressed to “Mother.” She speculates aloud about what could be in it: “What could it be?” begins the repeat. Treasure? “The box is so heavy and it rumbles like rocks.” A giant stuffed toy? (There’s something soft and furry inside.) A huge ball? A soft plump kitten? Finally she opens the box, flap by flap—and, thanks to a pop-up effect, the child who is hiding inside reaches out for a hug. Wrapped in ribbed brown paper, the covers feature die-cut carrying holes just right for peeking into (or out of) and for enticing young viewers to investigate Reichstein’s sketchy, soft-toned domestic scenes within. It’s a playful episode, rich in the sort of primary-level suspense and release that post-toddlers love—and the child in the illustrations could be either boy or girl. (Picture book. 3-5)