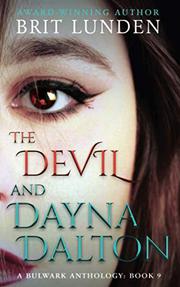 THE DEVIL AND DAYNA DALTON

A woman who has pined over a guy for years unwittingly captures the attention of a handsome but unsettling stranger in this novella.

People in the town of Bulwark, Georgia, generally dismiss Dayna Dalton. Due to her mother’s dismal reputation, some write Dayna off as Becky Dalton’s “white-trash daughter.” A reporter for local newspaper the Bulwark Advance, Dayna has had her choice of potential suitors throughout the years. But there’s only one person she wants: Sheriff Clay Finnes. She’s been drawn to Clay since the two were high schoolers in Bulwark. Although he’s respectful of Dayna, he rejects each one of her advances and wishes simply to be friends. Her longing continues even after Clay ties the knot with nurse Jenna Harper. But Dayna never makes a pass at the sheriff when he’s married, and she seems content with their working relationship, as he provides information on cases for the paper. Dayna typically writes puff pieces for the Advance but is always on the lookout for something juicy. She may have found just that with the wolf that nearly attacks her. But her editor assures her there are no wolves in Bulwark. Consequently, she keeps mum about the red-eyed stranger who apparently rescued her from the animal. When she returns to the woods where she first saw the man, Dayna hears someone calling her name. The stranger then appears in a rousing but surreal encounter, and Dayna later witnesses unexplainable things that make her question if she’s hallucinating or stepping into new, much darker terrain.

This is the ninth installment of a multiauthor anthology, with recurring characters and stories set in Bulwark. This brisk, enjoyable novella frequently references Lunden’s (The Knowing, 2019, etc.) Book 1 as well as her pre-anthology, Bulwark-set debut work. For example, there’s a notable scene featuring older townsperson JB Straton. To find out a lot of specifics about this character, readers would need to peruse the earlier stories. But the author suitably incorporates some details about the man in this installment (for example, chasing a possible article on JB ultimately leads to the stranger with blood-red eyes). Dayna, who has also previously appeared in the anthology, is a sympathetic protagonist. She has genuine affection for Clay, and she suffers a contentious relationship with Becky. In the same vein, Dayna’s “series of meaningless affairs” is a sign that she’s trying, and repeatedly failing, to find a deeper connection with someone other than Clay. The story, perhaps unsurprisingly, gets more somber as Dayna gets closer to the stranger. Scenes with the two are ambiguous, which will lead most readers to question, like Dayna, what she’s actually experiencing. Lunden’s writing style delivers titillating moments that still manage subtlety: “A faint exhalation of breath tickled her neck, making every organ in her body sizzle and snap back to life.” The humor is as dark as the plot. Dayna’s former babysitter, Thelma Sweetpea, is now her neighbor, and she has a wanton animosity for the reporter. Mrs. Sweetpea is funny as an elderly woman who evidently disapproves of Dayna’s lifestyle, but the neighbor also becomes progressively creepier.

An engrossing, sometimes eerie tale with a pragmatic but remarkable protagonist.

THE KNOWING
by Brit Lunden
Indie