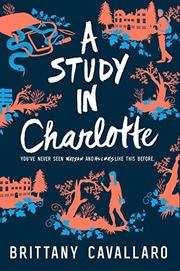 A STUDY IN CHARLOTTE

From the Charlotte Holmes series, volume 1

Watson’s and Holmes’ descendants try to live up to and with their ancestors’ legacies in this debut.

Stuck at Sherringford, a Connecticut boarding school, Londoner James Watson craves excitement, action, and romance. He tries to vent his rage on the rugby field during practice and hone his writing skills at night—emulating Dr. Watson but aiming to manage his money better—yet lives in hope of befriending classmate (and predestined companion) Charlotte Holmes. Like Sherlock, genius Charlotte plays violin, dabbles in disguises, conducts forensic experiments, and has a weakness for opiates. When a student turns up dead after harassing Holmes and fighting with Watson, and his death scene is staged like “The Adventure of the Speckled Band,” Watson and Holmes become both suspects and detectives…and where there’s a mystery, there might be Moriartys. While Watson wants to solve the case, he is equally absorbed in decoding enigmatic Charlotte, who is cunning, cruel, and fragile. Although death, drugs, rape, and betrayal make for a grim tale, slapstick humor and wit enliven the story. These sleuths may still be in school—and working out of a supply closet with smartphones—but Cavallaro’s crackling dialogue, well-drawn characters, and complicated relationships make this feel like a seamless and sharp renewal of Doyle’s series.