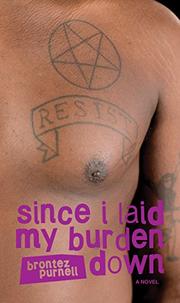 SINCE I LAID MY BURDEN DOWN

When DeShawn takes leave of his fast life in San Francisco and returns to his rural Alabama hometown, he finds time to slow down and contemplate his past and the many men—fathers, lovers, and friends—who have made him who he is. Purnell’s debut novel (Johnny Would You Love Me If My Dick Were Bigger?, 2015, etc.) is structured as a series of flashbacks to DeShawn’s childhood and young adulthood, which is peopled with an abusive stepdad, a feuding mother and grandmother, and kids who share his love of 1990s punk music, partying, and sexual experimentation. Sex and self-fashioning are at the heart of this narrative, and the novel is refreshingly frank about desires both normalized and taboo. DeShawn, whose queerness becomes obvious to his family and community early on, must navigate sexual interactions with kids his own age and the leering adult clergy and teachers whose own desires are warped into power trips (DeShawn “marveled at how much of his young adult life was spent in a room getting spanked by a dirty old white man”). DeShawn’s path of sexual discovery is linked to his discovery of self, and as his story unfolds, questions of who, and how, to love become more clearly articulated. DeShawn is a wild child, but he is also an uncle, a nephew, a son, and a community member. Purnell treats his subjects with a heavy dose of dry humor, as when DeShawn’s “fag-loving aunt” gives him a handful of Klonopin after a funeral and tells him “Don’t overdose, bitch.” The novel’s style is messy, and DeShawn’s inner dialogue doesn’t always provide much depth. But DeShawn’s story, like any honest story, is a messy one and, for all its rough edges, entertaining.

A complex, sometimes overly frenetic, look at one man’s experience of being black, queer, smart, soft, tough, artistic, and constantly in motion between rural and urban cultures.