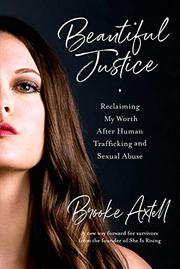 Reclaiming My Worth After Human Trafficking and Sexual Abuse

A survivor of sexual abuse and human trafficking shares her story and healing process.

When Axtell (Kore of the Incantation, 2010, etc.), a poet and musician, was a child, her male nanny abused her and sold her to other men for sex. Though she grew up believing the lies she was told by her abusers, part of her knew they weren’t true. While many women have recently stepped forward to tell their stories of abuse or harassment, Axtell’s story is different, as she focuses primarily on her healing and advocates for other women to do the same. “We are not victims, or even merely survivors,” she writes. “We are the new generation of leaders, fiercely devoted to creating a world where our lives are valued. And that begins with valuing our own voices.” The author released some of her pain through dance, writing, and singing, but she also used alcohol and unhealthy sexual relationships to mask her pain. In this candid retelling of her story, Axtell chronicles her traumatic past and the long, continuing road she has traveled to release her grief, fears, and anger and reclaim her sense of strength. Though her story is consistently heart-wrenching, readers will also share in her joy and optimism as she finds effective methods to cope with her anguish. Axtell has gone on to become an advocate for other sex abuse survivors, founding the healing community She Is Rising, and she shares the stories of a few others among her own. Perhaps the most useful section of the book is the end, where Axtell provides readers with the therapeutic techniques, mantras, meditations, and questions she has used to overcome her own pain.

A sometimes grim but ultimately uplifting and tender memoir from a woman who moved beyond victim status and embraced her full potential despite the unimaginable suffering she endured as a child.