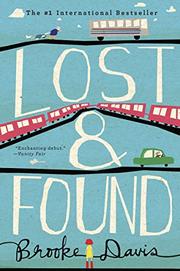 An abandoned child, a nursing home escapee, and an angry, elderly shut-in make for a unique team in Davis' whimsical and touching debut.

Millie Bird is only 7, though she has already seen her fair share of "Dead Things." The most recent addition to her “Book of Dead Things” is her father. Millie’s mother, who is struggling with her own grief, leaves her beneath a display of women’s underwear in a department store with the instruction to stay put. After spending the night in the store, leaving notes for her Mum and hiding from the security guard, Millie meets up with “Karl the Touch Typist” in the store’s cafe. Eventually, Millie realizes she must disobey her mother’s orders and go looking for her. She arrives home to find it empty and in a state of disarray. While wandering the neighborhood trying to find someone to help her, Millie ends up on the doorstep of perpetually cranky Agatha Pantha, a widow who has sealed herself off within her home. Though Agatha follows a strict schedule, only allowing herself a moment to feel loneliness, the compassion she feels toward Millie forces her to leave her house. Eventually Millie and Agatha meet up with Karl again, and set forth on their journey to find Millie’s mother. Life exists for the young and robust adults in the novel, while children and the elderly essentially become invisible, allowing for a world where a child and an old man can live in a department store with no one noticing and an old woman can be sealed inside her house by overgrown plants. Millie's preoccupation with death is uncomfortable, as are Agatha's and Karl's obsessions with their own mortality and those they have lost, but this circles the central idea of the novel—death is the thing that none of us are willing to face.

Borderline cutesy, but ultimately powerful exploration of grief from a skillful and original new voice.