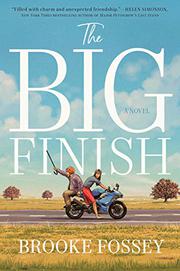 In Fossey's debut, a grumpy assisted living resident realizes his life still has surprises in store.

Duffy Sinclair, 88, knows he didn’t make the most of his life. He spent years of it as an alcoholic, but in his sober old age he’s finally found a home at Centennial, an assisted living facility. He has a best friend—his roommate, Carl, who shares everything with him. He has crushes and nemeses and playful banter with the staff members. Things are perfect—except that Centennial’s new owner will use any excuse to kick residents out so she can rent their rooms for more money, leaving them no option but a poorly run nursing home. Duffy tries to be on his best behavior and stay in line—but then a young woman tumbles through his window. It turns out she’s Carl’s granddaughter—one Duffy never knew he had. She has a black eye, an alcohol problem, and nowhere to stay—and Carl thinks she should camp out in their room. Duffy knows that getting caught hiding an alcoholic 20-something would earn him an immediate one-way ticket out of Centennial, and at first he tells Carl and Josie no way. But as he gets to know Josie and see the kind of pain he knows all too well, Duffy realizes he might finally have a chance to make up for all those wasted years. Duffy is cantankerous, gruff, and occasionally unkind, but his head is always an entertaining place to be. It’s clear that he cares deeply about his friends and fellow Centennial residents, and it’s impossible not to root for him. Fossey manages to depict the struggles of the elderly, whose concerns aren’t often examined in fiction, in a way that’s both respectful and entertaining.

A moving, funny, and ultimately hopeful look at what makes life meaningful.