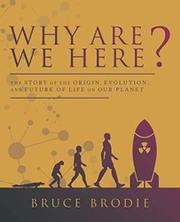 WHY ARE WE HERE?

A debut science book offers a history of life in the universe, particularly on Earth.

In the beginning of this comprehensive work, Brodie examines the creation of the universe. Subsequent chapters explore the fundamentals of physics and the development of the solar system, and then the author turns his attention to his home planet. After an overview of Darwinian and Lamarckian theories of evolution, the account moves through the development of life, from the first prokaryotes and eukaryotes to what it means to be human. The volume touches lightly on a multitude of subjects, educating readers without overwhelming them, while providing plenty of material for further study (a substantial glossary and encyclopedic list of citations make up much of the back matter). The book is both informational and highly engaging, in the tradition of Bill Bryson’s A Brief History of Nearly Everything, and works equally well for pleasure reading and as a substitute for a science textbook. Brodie is particularly adept at summarizing and synthesizing existing research, making the works of Stephen Jay Gould, E.O. Wilson, and Yuval Noah Harari integral components of his text. The narrative is well organized, with a logical flow from one chapter to the next, and manages to be challenging and engrossing while illuminating topics that are familiar territory, if not always as clearly presented. Brodie has a gift for pithy phrases (“We humans require hierarchy but yearn for our egalitarian heritage”) that render the text deceptively simple while making it a joy to read. In the Preface, he explains that the volume, which includes diagrams and photographs, is the product of more than seven years of research. The effort put into the detailed work is evident throughout, as is the inclusion of recent developments like CRISPR gene-editing technology. Readers who are interested in refreshing their knowledge of science fundamentals will find the volume a useful overview while those who join Brodie in asking the title question will have plenty of fodder for further discussion.

A well-written, enjoyable, and thoroughly researched summary of everything that brought humans to the present day.