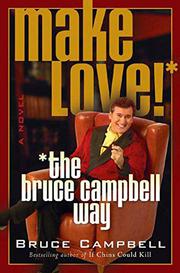 A rollicking spoof by B-list actor Campbell, hero of the Evil Dead series, who attempts to rise above his station and wreaks havoc in the bargain.

There is a B-list, and there is the A-list, and never the twain shall meet, especially for the fellow who, like the author, just happens to be named Bruce Campbell, a man who ostensibly romances leading women but really “hoards Victoria’s Secret catalogs” and is otherwise a bit of a nebbish. Bizarrely, as if in an alternate-universe setup from one of the myriad Sci-Fi channel shows on which Campbell can be seen, Mike Nichols requests him to play the role of a wisecracking doorman in his next film, a hip update of Let’s Make Love, with Renée Zellweger and Richard Gere in the place of Marilyn Monroe and Yves Montand. Campbell dutifully appears on location, layers his lines with a hammy backstory of his own concoction and amazes his fellow actors by his very presence. Things get better, and soon Campbell, secret agent of schlock, is running his lines with Richard Gere, coaching Renée’s costume designer and the star herself in B-tricks for accentuating breasts and bottom, and even outing the great cinematographer Vilmos Zsigmond (not Sigmund, as Campbell has it) as the filmic force behind long-forgotten embarrassments such as Psycho a Go-Go and Wild and Willing. Enter, as the story unfolds, the likes of Robert Evans and Jack Nicholson (who’s contemplating capping off Chinatown, about water, and The Two Jakes, about oil, with a film about vinegar), and the A-world begins to take on deeper shades of B. The story takes silly twists—well, sillier than what’s come before—as Campbell eludes SWAT team shooters and feds before winding up in the slam, where, “with a little ingenuity and two cartons of Kool Extras, I worked my way up to cleaning executive offices.”

Scratch the willing suspension of disbelief. But never mind: this is good fun, and lots of it. And besides, anyone who allows that Carrot Top’s agent is Satan is all right.