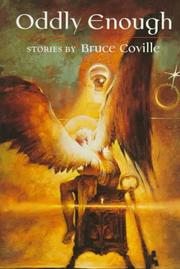 Coville's (The Dragonslayers, p. 842, etc.; I Left My Sneakers in Dimension X, above) collection of some new and some old short stories includes the spiritual, the mythical, the mystical, and the just plain silly. They are filled with angels, vampires, brownies, werewolves, many kids, and many morals. In ``The Box,'' a boy is given a box by an angel to safekeep. The boy carries the box with him his whole life, despite the mocking of others, and so changes the world. A conscientious objector in an imaginary land prevents war by advising the king ``With His Head Underneath His Arm''— because he had been beheaded for evading the draft. In ``Homeward Bound,'' a boy is irresistibly attracted to a unicorn's horn when he realizes that he is actually a unicorn trapped in human form. In a futuristic school essay, ``Old Glory,'' a boy tells how he turned in his own ex- hippie great-grandfather for trying to burn a fireproof American flag. Coville is a fine writer, but he doesn't show himself to advantage in this strange assortment of half- baked stories. An odd mix of the painfully earnest and the occasionally witty. (Stories/Fiction. 12+)