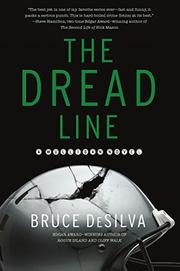 Getting fired from the Providence Dispatch has done nothing to lighten Liam Mulligan’s workload; the first chronicle of his work as a part-time private eye piles no fewer than three cases on his back.

The first job is the most straightforward: find the masked robber who stuck a gun in Ellington Cargill’s fabulously wealthy face while he was using his safe-deposit box at the Jamestown office of Pell Savings and Trust and walked away with jewelry valued at $6.3 million. The second has the client with the deepest pockets: the New England Patriots, who want McCracken & Associates, whose sole associate is Mulligan, to vet Conner Bowditch, the Boston College defensive tackle they plan to draft if he checks out. Since Mulligan (A Scourge of Vipers, 2015, etc.) already knows Bowditch’s not going to check out—he’s in debt to Mulligan’s old friend Dominic “Whoosh” Zerilli, the bookie who’s generously cut Mulligan in for a piece of his action—this job is a little complicated. But it’s not nearly as complicated as the third job: catching the creep who’s kidnapping dogs on the island of Conanicut, dousing them with lighter fluid, and setting them on fire. Mulligan, who’s just acquired two dogs of his own in the hope of protecting his homestead from the depredations of the fiend he dubs Cat the Ripper, is more than happy to join the hunt for this lowlife even without a client or a fee. But although the Bowditch affair drags on the longest and requires the most fireworks to resolve, it’s the search for the dog killer that ends up touching Mulligan most deeply.

Though all three cases are wound up less convincingly than they’re laid out, fans of DeSilva’s cleareyed, heartfelt anatomy of crime and punishment in Rhode Island won’t mind a bit.