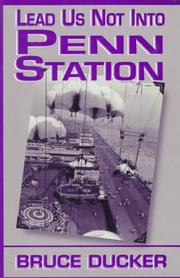 LEAD US NOT INTO PENN STATION

Brooklyn, summer 1955. The Democrats wonder if the nominee will be Symington, Kefauver, or Stevenson again; Walter O'Malley threatens to move the Dodgers if they don't get a bigger stadium; and 16-year-old Danny Meadoff calculates the odds against three teams from the same city so dominating the World Series as he trembles on the verge of manhood. Life is golden for Danny, who starts the vacation by talking himself into a job as a Fuller Brush man working under the even faster-talking John Everett Raycroft. He's good at the work, even though he's still waiting for ``the nookie payoff'' his buddies Rick Rappaport and Angie Valeriani kid him about; and his customer Frances Gunnerson, though she's nothing in the nookie department, is growing into the friend and confidante he can't find at home. Okay, there are clouds on the horizon: the Meadoff kids (Danny and two sisters) are constantly reminded that the family needs to cut back, for instance by having the maid in only Tuesdays and Thursdays; the three boys go into the hole to cover their bets at Aqueduct; Rick's flirtatious mother complains about his father's affair with a receptionist, and Rick talks more and more brazenly about stealing from Bernstein the candy store owner; Danny's father, an overextended importer, quietly moves out of his wife's bedroom into the spare room over the garage as he agonizes over how he and his unsympathetic partner are going to cover the uninsured loss of a shipment of jerseys; Danny recoils at having to deliver a threatening message to his father from a goombah collector. Ducker (Marital Assets, 1993, etc.) writes with the easy charm of William Saroyan, though he has yet to find a voice of his own. It's not giving anything away to say that everything turns out all right, except for Dodgers fans.