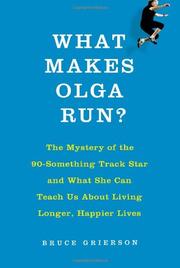 The Mystery of the 90-Something Track Star and What She Can Teach Us About Living Longer, Happier Lives

A Canadian freelance journalist probes the fascinating mystery behind a nonagenarian female’s stunning success as a competitive athlete.

When Olga Kotelko first took up track at age 77, it was simply for fun. But by the time she reached her 90s, the former schoolteacher had become the holder of more than 20 world records, and she was the fastest nonagenarian female in the world. In a book that is part biography and part exploration of the latest research in exercise physiology, gerontology and neuropsychology, Grierson (U-Turn: What If You Woke Up One Morning and Realized You Were Living the Wrong Life?, 2007) grapples with the question of why a little old lady barely 5 feet tall breaks records rather than bones. Science offers answers that are as tantalizing as they are incomplete. For most people, healthy aging boils down to three-quarters good lifestyle and one-quarter good genes. Grierson suggests that Olga’s habits—which include an “an abiding faith in water, reflexology,” intense workouts that target every moving part in her body and personal traits such as extroversion, friendliness and resilience—no doubt help to account for her impressive good health. Her family history, however, does not reveal exceptional longevity nor does it explain where Olga derived her almost freakish physical capabilities. Grierson proposes that the mystery surrounding Olga’s achievements has less to do with her lifestyle and genetic inheritance and more to do with how her particular body has somehow managed to develop mechanisms, which scientists have yet to understand, that have slowed the aging process. Olga’s body may be unique in its age-defying abilities, but her determination to push the limits of her own physicality is what is most inspiring of all, especially to baby boomers like the author. For Grierson, Olga is living proof that “[n]ot only is midlife not too late [to start exercising]…in some ways, it’s the best time to go for it.”