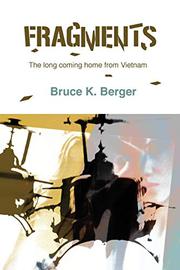 The Long Coming Home from Vietnam

A Vietnam veteran’s poetic reflections on the war.

Berger, a professor emeritus at the University of Alabama, has written multiple books on public relations and leadership. In this volume, he provides readers with 34 original poems based on his experiences as a soldier in the Vietnam War. Decades after the conflict ended, he notes, many vets remain psychologically “trapped.” Berger’s own “living fragments” of memory continue to haunt him a half century later, he says, “each a small piece of an unfinished mosaic in a gallery in my mind.” Writing poetry helped him stitch together these fragments, and ultimately helped him to “come home” mentally, long after he’d returned physically. The collection opens with a poem detailing Berger’s work as a “Next-of-Kin” editor in the Army, where he wrote hundreds of letters informing families of their loved ones’ deaths. Here, in his characteristically unfiltered style, Berger describes his own inadequacies writing “golden glorifications” of the sacrifices made by lost soldiers, whose families he knows will soon be trapped in “the straitjacket of emotional grief.” Overall, the works here are raw and often poignant. Although many poems reflect the author’s own psychological state (such as “Five Seasons for Soldiers,” in which memories of the war “loop endlessly” and “time runs forward, back”), others evoke other perspectives. “Orange Rain,” for instance, tells the story of the American and Vietnamese lives destroyed by Agent Orange, whose toxicity was “a shared secret” between the military and the corporate “chemical boys,” while another disturbing poem, “Girl Selling Her Fruit,” tells of a pubescent Vietnamese girl selling fruit, and sex, to American soldiers, suggesting that her “performance today…ensures a tomorrow.” The verses are accompanied by 24 pieces of original art submitted by members of the Providence Art Club in Rhode Island; they range from oil paintings to collages to digital illustrations. With varying degrees of effectiveness, and despite a few amateurish misses, the art effectively reflects the main themes of Berger’s poetry: the brutality of war and its psychological tolls, as well as the fragility of human life.

A powerful compilation of poems on the continuing costs of a 50-year-old conflict.