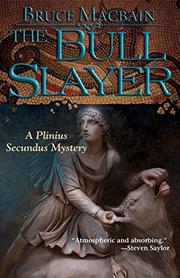 In A.D. 108, Gaius Plinius Secundus ventures east with his young wife, Calpurnia, and an entourage to the province of Bithynia-Pontus, on the Black Sea, where resentment against the empire runs high. Newly appointed as governor, Pliny's feted at the home of Marcus Vibius Balbus, the Fiscal Procurator of the province, and senses unrest there. His instinct proves correct when Balbus goes missing, as does his chief accountant, Silvanus. Nearly two weeks later, Balbus' partially decomposed body is found in a deep gully, transforming Silvanus into the prime suspect in his murder. Embezzlement of some kind is suspected of either or both of the men. Although the locals are inclined to blame everything on the infidel Persians, Pliny is neither so gullible nor so bigoted as to adopt this view. Pancrates, a slick, fraudulent fortuneteller who seems to exert a Rasputin-like control over several powerful locals, becomes a key figure in Pliny's investigation. So do the unctuous orator known as Diocles the Golden Mouth, who seems to pop up around every crime scene, and Glaucon, a hotheaded magnate who used to be a wrestler. On the personal front, Pliny struggles to deal with marital incompatibility; Calpurnia, who is prone to spontaneous outbursts, would rather play with her maid Ione than her husband.

Packed with colorful characters and a strong sense of history, Pliny's second adventure (Roman Games, 2010) takes its time developing its whodunit but consistently entertains along the way.