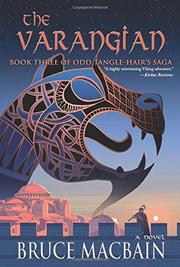 This third installment of a historical fiction series focuses on a bold Viking’s daunting mission in the 11th century C.E.

Having come a long way from his native Iceland in the first two volumes in this series (in escapades that included becoming enslaved by a murderous sorceress and serving as the personal poet of a Norwegian prince), Viking Odd Tangle-Hair in Book 3 lands in a most unexpected place: Constantinople. Known as Miklagard (“Big Town”) to the Norse, Constantinople teems with a number of competing interests. Posing as a Grand Prince of Rus, Odd plans to find and murder his former master, Harald Sigurdsson. Though it may seem like a simple enough task, Harald is a high-ranking member of the emperor’s Varangian Guard, an elite unit of the Byzantine Army composed largely of Norsemen. While locating Harald may be easy, disposing of him is an entirely different matter. Add in the politics and eccentricities of life in the Big Town and Odd’s scheme seems nearly impossible. Take Empress Zoe, for example, a most seductive and peculiar woman who seems to love nothing more than making perfume. Certainly volumes could be devoted to her motivations; however, she is just one of the many characters competing in this world of powerful eunuchs, mad rulers, and gut-wrenching punishments (why bother with execution when one can cut off the ears and nose of a rival prior to banishing him?). Thoroughly effective at explaining the intriguing and highly complex circumstances of the time period, MacBain’s (The Ice Queen, 2015, etc.) book shines in a way that only historical fiction can. Who needs King Jon Snow in Game of Thrones when one can get a glimpse of the historically real and undeniably sinister John the Guardian of Orphans? Even the most terrifying dragon pales in comparison to the sheer horror of a society so comfortable with castration. As the story ventures outside of Constantinople, the reader is treated to a plot that can only be described as epic. Though Odd’s love of a crafty young woman can create some saccharine moments (“I will always, always come back,” he vows), what would a well-rounded saga be without statements of devotion? Quick and violent throughout, Odd’s journey moves steadily until the very last page.