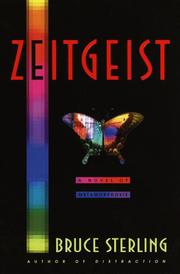 Turn-of-the-millennium spectacular, from the estimable Sterling (Distraction, 1998, etc.). Impresario Lech “Leggy” Starlitz arrives in the impoverished Turkish half of Cyprus (“Houseplants had eaten all the homes. Feral lemons and oranges supported a miniecosystem of rats and stray dogs”) ready to launch his girl band, G-7, at the Islamic world. The girls, known by their nationalities (the French One, the American One, etc.) can’t play or sing, though Leggy knows it’s not about music but concept. He has only one rule: it ends at Y2K. His new partner is Mehmet Ozbey, a handsome Turk with friends in the secret police and ways to launder money. To Mehmet, Leggy makes one further stipulation: none of the girls must die. Then Leggy discovers he has a daughter by his lesbian ex: 11-year-old Zeta loves G-7 and has telekinetic abilities—so long as there are no recording devices in the vicinity. And soon, despite his wheeling and dealing with Russian gangsters, Leggy’s squeezed out by Mehmet. He decides it’s time to disappear, so he smuggles himself and Zeta into the US in order to contact his father. The latter, having been at ground zero in the first nuclear bomb test, has become delocalized in time: he exists “anywhen” in the 20th century and speaks entirely in palindromes. Thereafter, Leggy turns straight, working in a 7-11, sending Zeta to school—until he learns that Mehmet intends to continue G-7 into the next millennium; worse, he has allowed some of the girls to die. Time for Leggy to intervene.

An inspired and brilliant paean to the old millennium and harbinger of the new, brimming with wit, flair, and insight: Y2K’s Catch-22.