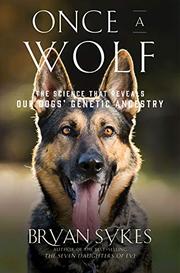 The Science Behind Our Dogs' Astonishing Genetic Evolution

How did wolves evolve into dogs? Sykes (Genetics/Oxford Univ.; The Nature of the Beast, 2015, etc.) reviews the state of the art on matters canine and lupine.

Past studies of canine evolution have relied on osteological and archaeological evidence, but since 2005, the fully sequenced dog genome has been available, allowing, among other things, for “re-drawing the evolutionary tree of dog breeds constructed with mitochondrial DNA over twenty years previously.” Five years later, writes the author, a new family tree was published, with all 64 breeds—even the Chihuahua—pointing back to the wolf. Some of those breeds are “ancient,” such as the Basenji and Samoyed; others are quite recent. Making those breeds required domestication, for which Sykes finds no evidence before about 50,000 years ago—still far earlier than previous studies have projected. Like other scholars, the author locates that origin in shared hunting, a process that may have altered humans as much as dogs in “the unstoppable current of natural selection.” Scholarly argument persists over whether the original raw materials of the dog were really wolves and not coyotes, jackals, hyenas, and other canids. Sykes charts the development of the Carnivora before settling, persuasively, on the scenario of Paleolithic hunters working in concert with wolves to bring down large game such as bison. The author goes on to examine some of the mutations that subsequently allowed human breeders to select for certain characteristics, whether the ridge of the ridgeback or the pigmentation of the bull terrier (with a passing nod to the heterochromia exhibited by David Bowie’s Ziggy Stardust). Melanism, hyperuremia, progressive rod-cone retinal degeneration: The author’s discussion can be densely technical at times but never enough to render the text inaccessible to those without a background in genetics and population dynamics. Moreover, he closes by looking outside of nature to find the nurture connected to our love of dogs, that “amazing psychic symbiosis."

Scientifically inclined dog lovers will find this a trove of information and provocation.