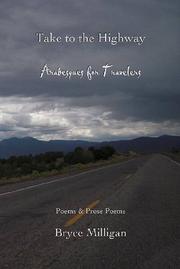 TAKE TO THE HIGHWAY

In a new collection “for travelers,” Milligan sometimes races and sometimes tools along; no matter the speed, it’s a pleasing ride.

In a recent interview, former Globe Theatre director Mark Rylance argued that much of Shakespeare’s brilliance is his control of the demotic, his acknowledgment that the real power of poetry may not lie in the words only he can say but in the words we all can say. Veteran poet Milligan (Lost and Certain of It, 2006, etc.) understands this concept, as well, and his latest book is a rushing river that spins and eddies around a few well-placed stones of utterly common speech. “Strings,” a sort of elegy for lost parents, opens with the exhausted “good grief, Daddy,” and slips away with the simple refrain of a woman whose mind has abandoned her: “now, who are you?” Around such vernacular anchors, Milligan builds a poetic structure characterized by balance (the “arabesque” of the title is a ballet pose demanding poise). The poet divides his book into three parts; the first and third feature relatively short stanzas and clipped lines while the second is full of longer prose poems “written at speed.” Most poets work well in one mode, either economy or abandon. Milligan can do both with grace. “Waiting for the Tow” is a study in brevity that teeters but never quite falls into the gnomic; it opens, provocatively, “The day is severed: / planned from unplanned, / necessary from / necessary now.” By contrast, “Four-Stroke,” a longer piece from the middle section, spreads out: “If ever you spent much quality time on the hurricane deck of a trusted motorcycle then had to give it up—trading it in, say, for a station wagon to haul around your rock band or maybe pay a tuition bill or buy an engagement ring—then you’ll recognize the symptoms of the syndrome.” That no word is wasted in either type of poem demonstrates the poet’s experience.