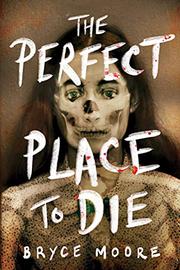 THE PERFECT PLACE TO DIE

A twist on disturbing historical events.

Sisters Zuretta and Ruby want to escape their abusive Utahn family, but Ruby manages to leave home first. When her letters abruptly stop coming, Zuretta heads east to Chicago to discover why. The teenager is immediately beset by grifters, but she has plenty of pluck: When police refuse to help her locate Ruby, she finds work as a maid in the hotel where her sister was last employed. That building, the Castle, is an ominous warren of hidden rooms and false doors populated by sinister employees—and the charming Dr. Henry Holmes. Holmes, a real mass murderer active during the Chicago World’s Fair, published writings after his conviction, and excerpts open each chapter. Zuretta’s involvement in the case is fictionalized, but the story’s true origins add suspense and excitement. Zuretta’s dreams of her sister as a moldering, ambulatory corpse don’t quite match the realistic events of the rest of the novel, and certain characters and events (the Pinkerton heir who helps her on her first day in Chicago, a hotel worker whose appearances stop once she’s less useful for the protagonist) are more convenient than is satisfying, but this novel will appeal to readers excited about an account of gruesome historical events steered by an intrepid young woman. The setting seems to include almost exclusively White people, including the main characters.