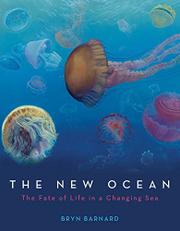 The Fate of Life in a Changing Sea

What will happen to jellies, orcas, sea turtles, tuna, corals, and blue-green algae in the “New Ocean” of the future?

Opening with the premise that global warming, pollution, acidification, and overfishing are dramatically and permanently changing the ocean—perhaps back to a primal sea—the author then considers the fates of six species, each one discussed in two double-page spreads that pair a substantial column of text on verso to a painting on recto that crosses the gutter. On the first spread, readers find a short description and bulleted facts and then, on the next spread, a column of dire prediction: jellies will flourish, devouring baby fish; orcas are already dying young in poisoned waters and in captivity; turtles are killed by oil-well accidents, litter, and fishing nets; tuna have been overfished and are full of poisonous mercury; coral bleaches and dies in too-warm, acidic, polluted waters; and blue-green algae will also flourish, especially a poisonous one called fireweed. The New Ocean will be oxygen-poor and could cause another mass extinction. These bleak forecasts are accompanied by Barnard’s beautiful oil paintings of sea creatures. His information is not inaccurate; his explanations are clear; the future he envisages is one of many possibilities. On a final spread he offers some suggestions for drastic public measures, personal actions, and an example of a teen invention, not enough to offset the gloomy aftertaste this warning is likely to leave in readers.

Only for readers old enough to handle the idea of environmental catastrophe.