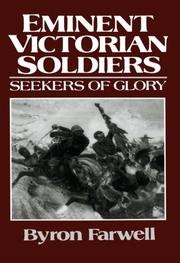 Vigorous military history of Victoria's reign (1837-1901) during which no year passed without British soldiers dying on some field. For the eight generals whose lives are recounted--Hugh Gough, Charles Napier, Charles Gordon, Frederick Roberts, Garnet Wolseley, Evelyn Wood, Hector Macdonald and Herbert Kitchener--war's glory was beyond poetry, ""life's greatest experience, barring a honeymoon."" Farwell's life of Gough (1779-1869) is typical. Gough began soldiering at 12, became a field officer (major) by 25, was soon a brevet-colonel, and at 37 when the Napoleonic wars ended was disbanded at half pay. While acting as a judge in Ireland, he rose to major general, and at advanced age returned to active duty to fight 16 more battles, become commander-in-chief in India (his favored tactic, not popular with fellow officers, was the bayonet charge), to be lavished and garnished with honors and knighthoods, almost until his dying day at 90. Charles Gordon (1833-1886) neurotically lusted for honors, enjoyed brandy, cigars and naked boys (and detested the bare Egyptian dancing gifts offered for his delectation). Farwell throws away Lytton Strachey's famous alternate death scenes (in Eminent Victorians) with ""Gordon was killed--accounts vary exactly how. . ."" and does not even tell us that Gordon's severed head was stoned by the Mahdi's troops. Garnet Wolseley's account of this first action (at 20), a charge on foot against Myat Teen's fortified Burmese stronghold, stands for all these glory-maddened Queen's officers: ""What a supremely delightful moment it was! . . . for the moment your whole existence, soul and body, seems to revel in a true sense of glory. . . The blood seems to boil, the brain to be on fire. Oh! that I could again hope to experience such sensations!"" The reverse: Kitchener's insane ferocity in sending assault after suicide assault against the Boers when no good result was possible. Farwelrs retellings are clean and unaffected, more like busts than monuments, and the living men step forth, noble, driven.