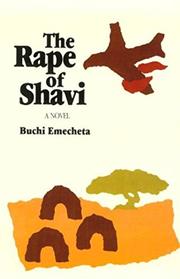 The corruption of a small tribal community at the edge of the Sahara desert by Western greed and ""culture""--in an explicit, if intermittently witty, fable. The village of Shavi, delicately presided over by King Patayon, ""the Slow One,"" prides itself ""on being the only place in the whole of the Sahara where a child was free to tell the king where it was that he had gone wrong."" Indeed, with the memory of slavery still ripe, Shavi is a marvel of democratic freedom, sacrificing birds (instead of humans) to the lake-goddess Ogene. But, when a fiery ""bird"" plunges out of sky, crash-landing in Shavi, the King and his people are somewhat bewildered. Who are these ""leprous""-looking creatures who survive the plane-wreck? To a Western reader, they're: Dr. Philip ""Flip"" Wagner, a nuclear scientist who has given up working on disarmament from within; Andria, an ex-protester at his plant with her child Kisskiss; gynecologist Ista, sour Mendoza, angry Ronje, and the boy Dorf. Still, in the opinion of priest Anoku, ""they may look human but they have no souls""--while Prince Asogba, the King's heir, is excited by the prospect of learning to fly ""birds"" (maybe to make war on neighbors). Eventually, then, the ""albinos"" are welcomed into the village, treated kindly; Flip and Ista respond on an amicable human level, adapting somewhat to the alien yet workable ways of Shavi. But then Ronje rapes the gentle Ayoko, slated to belong to Prince Asogba. (The Shavian women, to spare the men shame, take care of him!) Ayoko is soon discovered to have syphilis, symbol of the corruption of Shavi. And when the Prince accompanies the aliens back to England, he'll be jailed and humiliated, returning to Shavi with jeeps, drills, guns, bellicose plans: devastation results. . . and years later a new king will vow that Shavi must never be raped again. As usual, Nigerian/British writer Emecheta (Double Yoke, Destination Biafra) delicately probes the subtleties of tribal life--but, with robotic Westerners and bullhorn-style delivery, the parable-message here is too obvious and clangingly metallic to generate much sustained power.