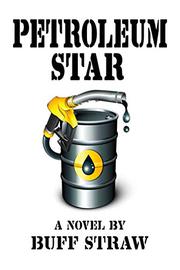 A debut sci-fi novel about life on an industrial planet.

Straw presents the bizarre tale of Horton Sphere, who was once a young man on Earth with a penchant for science fiction, an odd habit of composing haikus, and a job at a fast food restaurant. One day, however, he’s shocked to find himself in a very different place entirely. He suddenly materializes on a planet called “SUPEROIL” (an acronym for “Strategic Ultra Planetary Energy Reserves and Outlying Industrial Lithosphere”) where his human body has been replaced by frozen crude oil, his speech is now transmitted via radio frequencies, and the landscape around him is barren. It’s soon revealed that SUPEROIL is a planet made completely of petroleum. It lacks metals, oxygen, and culture of any kind, and other residents, like Horton, need not sleep, eat, or procreate. He’s shown around this dismal place by a girl named Gasoline Allie, who manages to get him a job on an oil rig. Horton doesn’t seem cut out for this work, but he makes the best of things while trying to puzzle out how he got to SUPEROIL in the first place, and if he’ll ever be able to go back home. Straw has clearly put of lot of thought into his worldbuilding, and he takes no shortcuts in explaining it all to readers. He details everything from the intricacies of Horton’s physical movements to the process of drilling for oil, both on Earth and on SUPEROIL. Such explanations consume pages and pages of text—and include a great deal of information about science and the history of Earth’s oil industry—but the payoff is an exceptionally unusual alien world. Even Horton, an avid reader of science fiction from “Asimov to Zelazny,” has never read about anything quite like this, and real-life readers are unlikely to forget it. That said, the abundant exposition slows the storyline to a crawl. It’s only in the final 100 pages of this roughly 600-page work that events finally pick up and a real sense of suspense takes hold. Nevertheless, even in the latter chapters, there remains much for readers to discover.