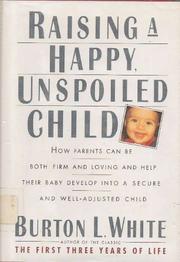 Sound but timeworn advice on how not to create a two-year-old brat from popular author White (A Parent's Guide to the First Three Years of Life, 1980). The terrible twos don't have to be, claims White. No, there is a snake in the garden and its name is overindulgence: Spoil the one-year-old, and the two-year-old will just be a bigger, meaner version. Parents may find solace in some of the stories of really diabolical two-year-olds, but don't expect to find forehead- slapping, why-didn't-I-think-of-that suggestions from the good doctor—his recommendations have seen a few seasons come and go: Don't let your child become bored, keep him amused; set limits so that your child knows her place; make sure that punishment is appropriate to the child's age; don't be overly accommodating or rush to console after every minor mishap. As is often the case in books on parenting and child care, advice on how to deal with problems goes aggravatingly halfway. For example, if your child wakes up at 3:00 a.m. and demands to get out of bed, White suggests singing a short ditty explaining that it's time for sleep. Nice, but what next if the child doesn't buy the offered goods? Banishment for the child? Earplugs for the folks? White has nothing more to say on the topic, or on what course to take after the 15th unsuccessful timeout, or how to handle a tantrum when ``distancing'' doesn't do the trick. White leaves the reader with the impression that there are two classes of two-year-olds and the choice is yours: the hellion, a life-wrecking barbarian of your own making; and the Åberkind, full of humor, imagination, and originality, a young boulevardier ready for cafe society. What about the other 95%? (Author tour)