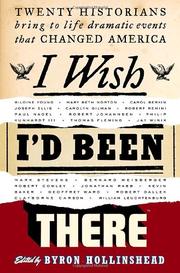 I WISH I’D BEEN THERE

Historians examine events they wish they could have experienced firsthand.

“What is the scene or incident in American history that you would like to have witnessed—and why?” editor Hollinshead asks his distinguished contributors. The answers run the gamut, from a 1783 plot against George Washington by his own officers to the conversation that took place between Lyndon Johnson and Alabama governor George Wallace around the time of Martin Luther King Jr.’s attempted march from Selma to Montgomery in 1965. Half of the 20 essays cover events that preceded the Civil War, such as the Salem witchcraft trials and the Amistad case, while the other half focus on more modern events, including Chief Joseph’s 1877 surrender to the Seventh Cavalry and an imagined conversation between John and Robert Kennedy on the subject of Vietnam. Exemplary pieces—by Joseph Ellis, on George Washington’s 1790 meeting with 27 chiefs of the Creek Nation; Jonathan Rabb, on the Scopes trial; and Clayborne Carson, on the March on Washington—effectively mix factual accounts with conjecture about unrecorded events. Others have the feel of a school history assignment, and a few explore events that, while significant, hardly “changed America.” Pieces about an 11th-century trip to the pre-Columbian city of Cahokia and the 1850 American debut of world-renowned soprano Jenny Lind lack dramatic impact.

Well-written but mixed collection: some substantial contributions, others self-indulgent.