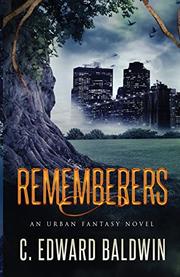 A college student’s visions may be effective in a battle against demons in Baldwin’s (Fathers House, 2013) supernatural thriller.

Nineteen-year-old Kallie Hunt has been waking up most mornings with a strange sense of déjà vu. These feelings are so disturbing that she seeks help from the Rev. Johnny Swag. Swag, who belongs to the Alliance of Initiates, a secret subset of the United Religions Organizations, suspects that Kallie is a Rememberer—someone with an ability to see “past life cycles.” The A.I. uses a Rememberer to thwart terrorist attacks before they happen, but one has gone rogue, taunting the A.I. by mutilating the bodies of terrorists that a Rememberer has already killed and leaving behind cryptic messages. The Rogue, however, may be planning something that’s far worse than a potential terrorist strike. The first half of the novel feels muted, consisting mostly of lengthy exposition. But these scenes ultimately prove crucial to the plot, as many delve into weighty concepts such as time-cycles and eternal return—essentially that time is circular and a Rememberer is literally remembering, not necessarily seeing the future. While the first part is restrained, readers will welcome the unleashed latter half, even if it seems to come from nowhere. Characters, for instance, face off against demons, are besieged by demonic possessions, and launch a rescue attempt. Kallie is a fervent protagonist with an intriguing background; she lost her mother to cancer the year before and is estranged from her father. Her relationship with love interest Seth is sufficient if not predictable, but the standout among supporting characters is Immigration and Customs Enforcement Special Agent Dennard Bennett. He, like Kallie, has experienced loss—his wife and two daughters died in a plane crash— and watching his progress from investigating a simple murder case to an all-out demon war is, in many ways, more riveting than Kallie’s gradual revelation.

A leisurely opening is mere preparation for the fierce struggle to follow—and it’s more than worth the wait.