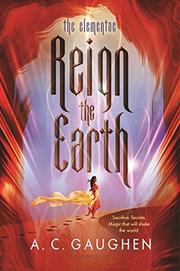 From the Elementae series, volume 1

Gaughen’s sophomore series balances a classic fantasy setup with a tale of abusive marriage and female strength in the face of extreme adversity.

For years the white-skinned Bone Landers have waged war; they ravaged the magic-wielding islanders and now fight the brown-skinned desert people. The marriage of desert-born Shalia to Calix, the Tri King, is critical for peace, and Shalia is determined to do her duty. But Calix’s handsome face hides a cruel spirit; the genocide of the Islanders was his doing, revenge for a perceived failed romance. Shalia tries to heal his anger with patience and understanding even as she manifests the elemental magic Calix has sworn to eradicate and tries to protect her brother, who leads the resistance. Calix is a textbook abuser; he blames others for his cruelty, he tries to control everything about Shalia, and he frequently tells her how much he loves her even as he hurts her. Despite her naiveté, Shalia refuses to be victimized, making this both a traditional fantasy (complete with requisite forbidden romance) and a manifesto of female strength. Heavy exposition bogs down the early chapters, but once the narrative takes off Shalia proves herself a worthwhile heroine.

The readers who flock to this will find more than they expected, and Shalia’s strength will give them something truly worth swooning over