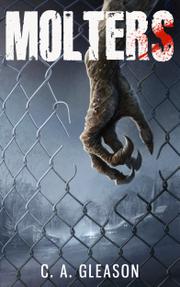 Gleason (Ravagers, 2016, etc.) splices together adventure, horror, and a threat to the survival of humanity in this novel.

Jonah is a former soldier and somewhat recovered drug addict. He convinces a group of cohorts, including his best friend, Eric, and ex-wife, Sharon, to accompany him on a vacation to his old Army stomping grounds in Germany. All told, there are six of them. That doesn’t last long, because while they may have come in search of fun, something horrific finds them instead. They’re called molters, and they infect and use human hosts to reproduce. Jonah’s Army training is the best chance the band has at surviving (“Jonah could feel his friends crumbling. He knew to expect childlike behavior from them....People were unpredictable in a time of crisis. Jonah knew he had to stay strong for everyone, no matter what”). But the molters have already decimated an entire military base, the same one Jonah had been stationed at years before and the place the group decides to seek shelter in, hoping it is safe. The problem is, as far as anyone knows, the molters could be everywhere, and safety might be a distant dream for all of humanity. Indeed, the new reality might just be a nightmare. The horror elements of the narrative are decidedly prominent, incorporating moments of terror, suspense, and the unknown. But the action-thriller aspects are stronger. The molters are scary, but they can be fought and, sometimes, gruesomely killed. Overall, the story proceeds in a highly cinematic manner, with short scenes within larger chapters. And as with a horror movie, it doesn’t pay to get too attached to any of the characters, since they’re all targets. Perhaps because of this, none of the players (with the possible exception of Jonah) come across as terribly well-developed. The sketchy plot, too, often seems to take a back seat to action sequences. These sequences, however, do exactly what they need to. They’re well-written, engrossing, and pack plenty of verisimilitude. For some readers, that may be enough. The molters aren’t zombies, but they still should please aficionados.

A fast-paced, light read likely to appeal to fans of the walking dead and post-apocalyptic action thrillers.