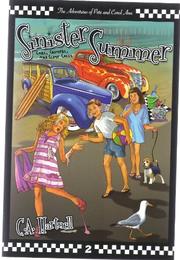 Set against the backdrop of ’50s America, two childhood friends find one adventure after another during the most exciting and dangerous summer of their lives.

This second installment of Hartnell’s the Adventures of Pete and Carol Ann series revisits 11-year-old heroes Pete and Carol Ann in Southern California circa 1955. The story, and their summer, begins ominously as Carol Ann crashes a go-cart while Pete and their other friends look on. Neither child is aware this will be the least exciting thing to happen to them in the coming months; a summer filled with surfing lessons, car accidents, adventurous tales from relatives on Route 66, and regular run-ins with the notorious Cruisers—a group of jelly-rolled teens always in the background, looking for trouble. The book is part memoir, and Hartnell paints a historically accurate picture of growing up in the ’50s, giving vivid accounts of the time by littering the story with period-specific set pieces and slang. Most of these are integrated effectively, but some descriptions become repetitive, even for younger readers, and too often characters parrot information unnecessarily. The book’s strength is its characters, from the hilarious antics of the children’s dog, to the adversarial dynamic between Pete’s spoiled sister and Carol Ann. These interactions fill the gaps from event to event, and make up for the story’s lack of overarching plot. Combining the engaging characters with the author’s commitment to consistently raising the stakes (along with plenty of foreshadowing), the book makes for a never-boring, all-ages read. Strong Christian overtones are also present, but they grow subtly and organically, strengthening as the characters need them.

A family-friendly combination of memoir and historical, Christian fiction, light on plot but with plenty of action and ’50s Americana.