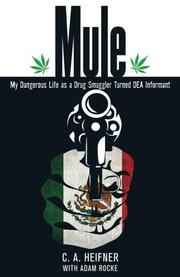 My Dangerous Life as a Drug Smuggler Turned DEA Informant

by C.A. Heifner with Adam Rocke

Melodramatic account of a marijuana smuggler who switched sides.

El Paso–based motivational speaker Heifner asserts that his criminal involvement followed a limited arc. Over several months, he accepted a number of missions from his flashy, vulgar college friend Jake, driving carloads of cannabis across the Mexican border. When arrested, the author received a light sentence of probation and deferred adjudication and a visit from DEA agents, which inspired the none-too-thoughtful Jake to threaten Heifner and his family’s lives. This led him to volunteer as a DEA informant in order to keep his family safe. The author works to document Jake’s connection to large loads of pot, even while redeeming himself by returning to school and reconciling with his harried wife. Although Heifner endeavors to get inside his paranoid, angst-ridden mindset, the prose is too hasty—much of the narrative reads like a Maxim true-crime article expanded to book length, with artificial dialogue and a constant stream of cliché and overheated language (“I was a wrecking ball, and everyone else was a straw house”). The lack of verisimilitude is also unfortunate. Heifner does not explicitly identify many of the characters or cases (other than an epilogue that mentions the arrest of Jake’s partner), and conveniently, Jake disappeared and is presumed dead. Heifner is an unsympathetic protagonist, as he expresses contempt for the incompetent cops and criminals around him, trumpeting his own superior intelligence rather than looking for nuance or irony in his circumstances, and he portrays minor characters in terms verging on sexist or racist caricature.

Adds little to our understanding of violent international drug smuggling.