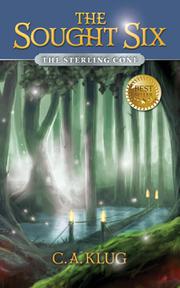 This debut novel sees six young school friends transported to a magical land and trained to be its protectors.

Twelve-year-old identical twins Jenna and Hallie Dalmore and their friends Jules, Lindsay, Alan, and Thomas live on the same street in Peterborough, Ontario. One day, Jenna and Hallie arrive home from school and find an old friend of their mom’s waiting—Annabel Scott, who hasn’t seen them since they were babies. Annabel is from Pawcombe, a magical realm that can be entered only by way of Root Paths—trees that exist both in Pawcombe and Canada, linking the two places. She says that Jenna, Hallie, and the others are in danger. Unbeknown to them, all six were born in Pawcombe and have a dangerous enemy there. Now that the evil Zyngor has learned of their existence, the Sought Six have no choice but to return home and fight him. Annabel herself was once part of a Sought Six group, as were Jenna and Hallie’s mom and Jules’ uncle. The six friends will be trained well. But can they survive Zyngor’s attacks and beat him to the Sterling Cone—a powerful artifact that in his hands could plunge Pawcombe into ruins? When discussing their friendship group, Jenna and Hallie make reference to the Fantastic Four and the Magnificent Seven. An equally apt comparison would be The Famous Five or others of Enid Blyton’s numerous middle-grade series. Klug upholds the Blyton tradition, crafting a simply told story with plenty of action and exposition and perhaps one or two protagonists more than necessary. Jenna and Hallie are distinct characters (in both speech and personality), as are Alan and Thomas, but Jules and Lindsay don’t offer much in this series opener. The adults in the tale are memorable and always sufficiently close at hand that young readers won’t be taken too far from their comfort zone. The plot moves quickly, its twists not so subtly foreshadowed. Klug’s prose may not be the most polished, but for most readers that won’t matter. Like J.K. Rowling’s Harry Potter books, the sparkle here comes from an abundance of magical ideas. Knock four times—Pawcombe awaits.

A safe adventure packed with imagination.