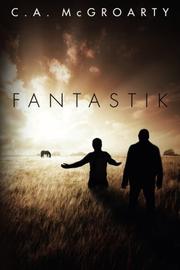 by C. A. McGroarty

McGroarty’s debut novel tells the story of a troubled ex-con and a city bus driver who has visions.
The story focuses on the strangely intertwined lives of Jake Mott and Charlie Boone. Jake is a man just exiting prison after a stay of 30 years, and bus driver Charlie is a young husband and father with a troublesome past and disturbed sleep. Jake fears God but has never confessed the extent of his crimes; Charlie sees imaginary people and hears voices. Charlie’s marriage is suffering, his job performance isn’t up to snuff, and his catatonic mother doesn’t recognize him. His wife, Lisa, takes him to a psychic, who tells him that he’s destined for a hard, lonely life; meanwhile, his escalating visions seem to have something to do with a wildfire in California. At the same time, Jake settles into a camper in a park nearby. When the two men’s paths converge when Charlie’s son loses his puppy, Charlie is immediately struck by a strong sense of recognition. It soon becomes clear that the two men share a connection that neither could have ever anticipated. When they meet again in a neighborhood bar, Charlie thinks, “This was it. It was all about this man.” It turns out that there’s a spot in the California desert where remnants of Jake’s past lie buried. On their way to find it, Jake and Charlie take a journey that transforms and restores them both. McGroarty handles his diverse cast of characters well, from aging felon Jake to Charlie’s severely mentally ill mother. The members of the Boone family, as well as the Mott family of Jake’s memory, respond realistically to hardships and share sometimes-strained bonds. McGroarty’s decision to put his protagonists on the road allows him to vividly detail who they are and who they become against the backdrop of the Midwest and West. He also includes rich regional nuances and even an appropriate musical soundtrack: “She was reminded of a line from that Nat King Cole song. ‘When I give my heart, it will be completely.’ Well, years ago she’d given her heart to Charlie, and there’d be no taking it back...ever.”
A well-told story of destiny and redemption set against a distinctly American backdrop.