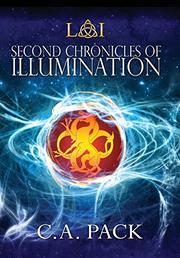 In Chronicles: The Library of Illumination (2014), readers met Johanna Charette and Jackson Roth, teens who co-curate a library where the subjects of books can enter the real world. In their first five adventures, the two faced increasingly complex situations that tested their inquisitiveness and loyalty to each other. This second volume reprints the fifth story, “Portals,” to reintroduce audiences to the 13 Libraries of Illumination set on different worlds, including Romantica, Scientico, Terroria, and Fantasia (Earth). The next entry, “The Overseers,” brings the teens to Lumina, the prime library realm, where Johanna’s mentor, Mal, is tested for a position in the College of Overseers, which runs the library system. Competing against Mal is Terroria’s horridly ambitious Nero 51 (introduced in “Portals”). “Myrddin’s Memoir,” a novella-length sequel, sees a book arrive on Johanna’s desk that proves to be the legendary wizard Merlin’s diary of spells. The wizard projects himself through the open volume and explains to Johanna that someone wants to steal his work and must be stopped at all costs. The collection ends with a preview of “Escape to Mysteriose,” the next story in Pack’s deftly expanding universe. As in the first Chronicles, the relationship between 18-year-old Johanna and slightly younger Jackson is grounded in light romance and sarcasm; when he suggests he’s one of a kind, she replies, “We can only hope.” Pack’s prose is lucid and tight, especially when explaining the libraries’ logistics: “This is a Library of Illumination. When the information kept here disappears, the contents of [citizens’] personally owned literature and documents will vanish.” Nero 51, meanwhile, is a master manipulator who lies as steadily as a heart beats; he also smells like “a chemical factory built in a field of rotting flesh.” Pack’s aptitude for spinning plots major (time travel) and minor (Pru Tellerence’s missing child) continues to make this a singularly engaging series.

The stakes have never been higher in Pack’s inventive epic.