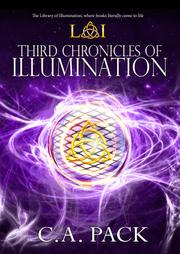 In the latest volume of Pack’s (Becoming Johanna, 2016, etc.) YA fantasy series, curators Johanna and Jackson try to stave off a Terrorian invasion of the interdimensional library system.

Books within the Library of Illumination come to life—literally. Eighteen-year-old Johanna Charette and her boyfriend, 17-year-old Jackson Roth, are co-curators of the library, which they recently learned is part of an interdimensional system of libraries connected through portals. One of the connected realms, Terroria, is home to the power-hungry Nero 51, who wants to storm the other realms—Romantica, Juvenilia, and Fantasia (Earth) among them—to destroy all the books and steal their knowledge. Thankfully, the overseers, who manage the libraries, have sealed the portals and trapped Nero 51 between realms. Unfortunately, the Terrorian is in contact with a shape-shifting Mysterian named Odyon, who covets the Book of Myrrdin (Merlin). If this weren’t trouble enough, Johanna and Jackson are continually working together in the library. Their relationship has grown fraught, and though Jackson wants to plan for their future together in college, his penchant for sarcasm eventually leads to a cooling-off period with Johanna. Meanwhile, the various realms prepare for a Terrorian attack. In this third volume of the series, Pack shows readers the various realms, all different from one another. Those on Juvenilia “live to age fifteen and are then reincarnated as three-year-olds,” while those on Adventura are hu*bots, beings who combine biological and technological components. We also learn about the Library of Origination on Lumina, where an oracular gemstone helps the overseers, as Master Ryden Simmdry puts it, “align…thoughts and remove distractions” so that the “way to resolve a particular problem soon becomes clear.” As Pack creatively animates the various realms, the relationship between her two protagonists maintains the novel’s bittersweet tone. Johanna and Jackson are beautifully believable, especially as they drift apart. Everything combusts in a cliffhanger finale.