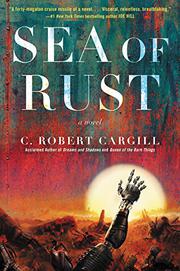 Cargill (Queen of the Dark Things, 2014, etc.) takes readers to Earth's post-human future in which robots struggle to survive and remain free of their own robot overlords.

The last human died 15 years ago at the end of the human-robot war that arose from a robot uprising. The robots fought for their freedom, but it was short-lived: now the world is dominated by One World Intelligences, massively powerful AIs bent on absorbing individual robots into their ever growing hive mind. North America is the battleground for two OWIs, VIRGIL and CISSUS, with unclaimed territories shrinking every year before the OWIs' expansion. As the OWIs have seized the means of production, the robots who remain must trade, fight, and scavenge for parts to keep surviving. One such scavenger is Brittle, a former Caregiver robot haunted by memories of the war and the fates of the humans she once served, first as a nurse and then as a friend. All Brittle wants is to retain her independence and keep ticking, but some of her vital parts are failing, and Caregiver robots are rare—rare enough that the only other one around, Mercer, wants Brittle's parts, too. An attack by Mercer locks both robots into a race for time, and an attack by CISSUS drags Brittle, Mercer, and other bots into a tense secret mission that may end the OWIs' hungry rule—if our heroes can survive explosions, plasma cannons, four-oh-fours (robots who have gone entirely insane), betrayal, and their own deterioration.

Innovative worldbuilding, a tight plot, and cinematic action sequences make for an exciting ride through a blasted landscape full of dying robots.