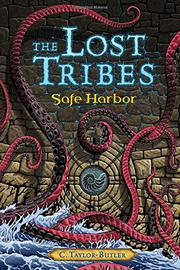 From the Lost Tribes series, volume 2

Ben, his sister, April, and their friends Grace, Carlos, and Serise return in this sequel to The Lost Tribes (2015).

The kids have discovered their parents’ secret: they only look human—they’re actually ETs. Setting a rollicking pace, the book takes them to the Bermuda Triangle and undersea Atlantis before delivering them to the secret underground space station, Safe Harbor. The kids begin training with their respective tribes (which roughly correspond to Africans, Asians, Meso-Americans, and Native Americans) but are bored much of the time: they want to help prevent the imminent destruction of Earth and search for their missing parents. The result is unsanctioned adventures that sometimes result in gains for the kids…but other times end in tragedy. Taylor-Butler doesn’t pull any punches, and Ben—whose impetuousness results in the death of another tribe member—is left to deal with the consequences of his actions. He has help, but the narrative allows him to feel the weight of his poor decisions. Meanwhile, the others try to adjust to having new tribes, new identities, and no parents. A secret revealed, along with unsolved mysteries, will leave readers eager for the third installment. While it’s overtidy that the protagonists’ alien tribes align so clearly with diverse Earth cultures, the solid character development, strong writing, and action will appeal to sci-fi and adventure-story readers alike.

A great choice for reluctant readers as well as fans of Rick Riordan and the Artemis Fowl books.